In general, when you ask for a quote, your printer will select the most cost efficient option for you, but to give you a more in depth understanding of why and when they would choose Lithographic print or Digital print, here’s something of a beginners guide: 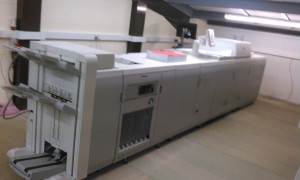 As you can see from the images of our 5 colour Komori Press (lithographic printer) and our Canon Imagepress 6011 (digital printer), both are incredibly sizeable machines.  These need to be housed in a large space with plenty of room to work around it and to store paper and inks, as well as to trim, finish and pack the printed products ready for despatch via our own delivery van, Royal Mail or courier service.  Lucky then, that we moved into larger premises back in 2013, and were able to house our newest addition with minimal disruption to the rest of the team!

One final thing for you to consider when buying lithographic or digital print, is the location of the printer.  As you have discovered a large amount of space is needed to house the machines required to produce a superior standard of print.  With space being more expensive, and harder to come by, in major cities and popular locations, many printers have moved their operations outwards which has allowed them to keep their costs down by inhabiting warehouses in much cheaper areas.  So, just because a printer doesn’t have a London postcode, don’t count them out just yet, it’s highly likely you’ll find them to be just as professional and progressive, and able to offer you quality and speed at vastly competitive prices.

You have Successfully Subscribed!