Our passion for print is only half of the story. We pride ourselves on providing superior quality print, but that’s not our greatest asset. Our ability to achieve the near impossible is what sets us apart from the rest. Our truly dedicated team bring a wealth of experience in creative design, digital, large format and Lithographic print, finishing, project management and even distribution. We are all focused on exceeding your expectations and when you need us to be flexible to help you achieve your business goals, we are more flexible than Daniel Browning Smith. AKA Rubberboy.

Andy began his career in the print trade as an apprentice letterpress printer in 1972. Nine years later he and his wife Anne moved to Brixham and started their own business named AC Print. After several acquisitions, relocations and developments, AC Print Ltd now has a team of ten dedicated people serving a wide range of clients. With over thirty five years experience in the print trade Andy’s knowledge and experience helps AC Print stay ahead of the competition.

Annie moved to Brixham with Husband Andy in 1981 and ran the business together in the early years. Since then she has become qualified in accounting and is now responsible for all company business and maintaining company accounts. 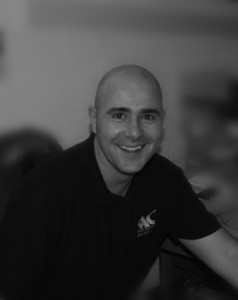 Andy has 18 years experience in the design and print industry. He began his career as an apprentice, working in a West Midlands based design studio and attended Matthew Boulton Design College. In 1995 Andy & his wife moved down to Brixham and started his own design business called GRAFX which within 2 years became a limited company and had a design studio based in Ipplepen, Devon.

In 2002 and after working closely with AC Print throughout the ‘GrafX’ days, he joined forces with Andy Cousins and became a director of the company.

As the business has evolved so has Andy’s roles, which now includes not only running the studio but also the entire pre-press section of AC Print, from artwork through to CTP, large format and digital. Andy works closely with clients such as Wonderbra, Playtex, WKD and Emcas. Some printed material can be seen both in high street stores and on TV.

Mark started his career working for a distribution company based in the Midlands and after twelve years decided to leave his job as Distribution Manager and relocate to Torbay and was offered a position at AC Print. Ten years later Mark is now responsible for quoting and scheduling, ensuring your job is done on time and at the best possible price.

Derek is a highly skilled print finisher with over 39 year’s experience in the print industry. He worked as a camera operator and machine minder for 25 years before joining AC Print as a Director. Derek is now responsible for managing the finishing and despatch departments, ensuring all jobs are completed and despatched on time.

Karen has more than 30 years experience in the print trade and is highly skilled in many disciplines. She started her apprenticeship as a machine minder and joined AC Print twenty five years later. Karen is probably the most versatile member of our team and is proficient in many areas including pre-press, printing, finishing and despatch.

Steve has enjoyed a thriving career in the print & design industry. He first entered the trade at the age of 16 as an apprentice and gained valuable experience in all aspects of the print trade before moving into graphic design. 23 years on Steve has the experience and the creative flair to produce exciting and effective design solutions that work for you. Over the years Steve has become a key member of our team enabling us to offer exceptional design solutions at realistic prices.

After a flourishing career as in the print trade Tim joined AC Print five years ago and is our principle five colour machine minder. By utilising the very best technology available to him together with 25 years experience, means Tim produces excellent results from our 5 colour Komori press.

Jo has been in the Sales and Marketing industry for over 10 years, starting out working in the Sales department of the local newspaper, part of Northcliffe Media Group. After being made redundant, Jo made the step toward Marketing to give her more rounded knowledge and experience, and has worked on many major national brands including WKD, Merrydown, Shloer, Woodys and First Cape. Jo has expertise not only in Marketing, but in negotiation, stock control and product sourcing. Jo brings a new element to the AC Print business, doing all the things we have wanted to do, but have been too busy running the machines to make happen!

Cally joins us from a background of Advertising Sales Support where she used her skills from her Creative Media Diploma to work on the smooth production of customer adverts.  Whilst studying for her Diploma back in 2012, Cally came to us for work experience and given her performance and attitude then, we are thrilled to have her back on a permanent basis.

Cally said she is excited to be working for AC Print Ltd in her new role, as she is able to really explore her passion for design and see each job through from the very start of a design brief, right through to the end printed product.

Outside of work, Cally is a keen photographer, spending much of her time out and about walking the Brixham coastline looking for that special shot.   She’s also been known to get lost in the odd book or two at the end of her garden, particularly those of the Hogwarts variety.